CUPS would like to welcome you to a new academic year!…and what better way to start it than with some pole classes. We offer classes for students of all abilities. If you have never tried pole, perfect, now is the time! We will be at the Freshers’ Fair on Parkers Piece on Tues 2nd and Wed 3rd October, so come check us out and sign up for an incredible workout and community of friends. We will also be hosting some FREE taster sessions! See times and dates below, along with this terms schedule.

Membership for the year will cost you £15 and this will get you classes for £3. Otherwise classes will be £5. Membership also allows you to come to our Open Practice sessions on Saturdays (see below). Class bookings are essential as we have a limited number of poles. More information can be found on our website http://pole.soc.srcf.net

FREE taster sessions for first time polers or experienced polers who would like to check out the society. Book via the doodle poll:

If there are no spaces left,  leave a comment on the doodle poll and we will put you on a waiting list. If enough people express interest, we will hold more taster sessions!

£3 for members, £5 for non-members. You must book in advance via the website store: http://pole.soc.srcf.net/product/beginner-class-ticket-2018-2019/

£3 for members, £5 for non-members. You must book in advance via the website store:  http://pole.soc.srcf.net/product/intermediate-class-ticket-2018-2019/

These practice sessions are not teacher lead and will not be open to first time beginners. But beginners with a good level of pole competence both on the pole and in setting it up are welcome, and anyone of higher levels. These sessions are available for members for FREE (no need to book) to work on routines or practice what you have learnt in classes.

Twenty-eighteen was host to the first ever Pole Varsity. This was a production showcasing the skills of pole dancers from the University of Cambridge, University of Oxford and Anglia Ruskin University (ARU). The event was hosted by Pole Flex Arts of ARU at The Academy and was definitely a night to be remembered.

The night started with an opening act by all the performers to The Greatest Show (from The Greatest Showman Soundtrack) and was followed by 19 performances including solos, duets, trios and larger group numbers.

Nine CUPS members performed; with duets from Liat & Kasey, Liam & Lily, Julie & Ruby and Helen & Katy. Helen & Katy are both new to pole and had their first ever pole performances; you would never have been able to tell. Katy went on to do a solo to Despacito (Luis Fonsi), showing off her crazy foot work and dancing skills. Liat & Kasey’s performance was a very romantic duet to Thinking Out Loud by Ed Sheeran, such strength and beauty in their performance, with customized costumes by the ever talented Kasey. Liam & Lily performed an extremely fun and upbeat routine to I Need A Hero – Jennifer Saunders (Shrek 2 Soundtrack) – fairy wings and tiaras were present. Julie & Ruby did a lovely slow routine with flowy skirts and some impressive acro moves. The FOMO was all too much for Jemima to just be a spectator and after the first half she jumped on stage with an impromptu solo to Chandelier by Sia.

The night ended with guest performances by Hazel and James from Wings Arial Fitness.

It was a brilliant showcase highlighting the true art and strength that is pole dance and the diversity of people and performance type it attracts. So proud of all of our performers! We look forwards to next year!!

PS a big shout out to Maggie from ARU for bringing this wonderful evening together.

On Sunday 4th February, 4 CUPS performers set off to Birmingham for the Inter-University Pole Dance Competition 2018 regional heat. Somewhat confusingly, Cambridge had been entered into the ‘midlands’ regional; next year we might suggest that the organisers look at a map.

Upon arrival, it was impossible not to be intimidated by the other competitors’ flawless makeup and impossibly bendy warmups, but we did our best to stay calm and soon the show was underway. We were extremely lucky to see performances by each of the guest judges: Jade Marissa Tinkler (World Pole Sport and Fitness Doubles Champion 2016) and Rachel Tolzman (Miss Pole Dance UK pro 1st). Both performances were spectacular, with incredibly difficult moves linked together with beautiful flow.

After the judges’ performances, it was time for the competitors. First up from Cambridge was the group routine, somewhat subverting pole’s sexy reputation by dancing to Lets Get Down to Business from Mulan, complete with moustaches and beards. Given that we all agreed that the 3 most appropriate words to describe our routine were “last minute chaos”, I think it went as well as could be expected. At least no one was dropped on their head. 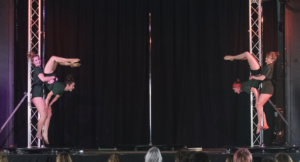 Arabella, Liat, Jemima and Ruby. Not entirely sure how we thought this would help us defeat the Hun.

Next was Arabella Barwick in the beginners category, dancing to Disturbia by Rihanna. She was one of the few performers at the event to brave wearing heels, and she absolutely killed it. Unfortunately in the face of strong competition, she didn’t make the podium – but watch this space for next year. 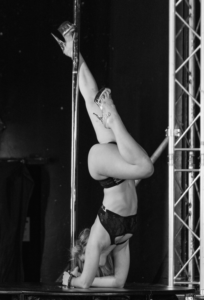 Soon after lunch, it was my turn to perform. I was competing in the intermediate category, and had chosen Chandelier by Sia – a song which I now never want to hear again. I was relieved when my routine passed without a hitch, and very pleased at the end to be awarded 3rd place in the category! 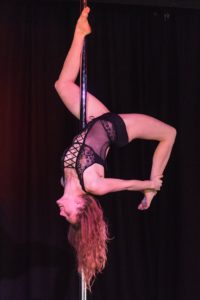 Poor Liat Adler was the last soloist in the entire competition to perform, and whilst the rest of us could relax and enjoy the other performances, she was on edge all day. However this didn’t hold her back when she came to dance to Cry Me a River by Michael Buble. She executed her advanced routine flawlessly, and unlike lots of the other advanced competitors, her form stayed really good right until the end of the routine. Her whole family came along to support. We were all pretty sure that she had won, but when it was finally announced we still screamed the roof off. Her sister was in floods of tears, and I think her Dad might have shed one or two as well. 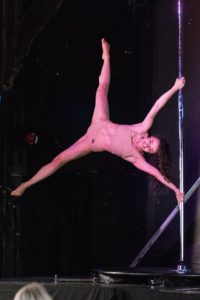 Liat smiling cheerfully whilst holding an Iron X – what a beast

We didn’t get through to finals (probably a good thing given that they’re in Newcastle), but we did have a whole lot of fun, and we’re all feeling inspired to train hard after seeing everyone else’s routines. Altogether it was a fantastic day, and I’m very proud of the whole team.

CUPS and CUPLC showed off their skills to one another at the sports centre, followed by a burger at the GBK.

Once the poles were set up, Liat Adler led an incredible pole session, where the power lifters learned how to do some basic spins, as well as not so basic poses; including butterfly and shoulder mount. Everyone had a lot of fun, and were keen to have another go at pole in the future. The power lifters then went through the basics of squats, deadlifts and bench press, which was very informative and certainly inspired me to add more of those moves to my gym routine. This was a great opportunity to not only learn about a new sport, but to meet some great people. 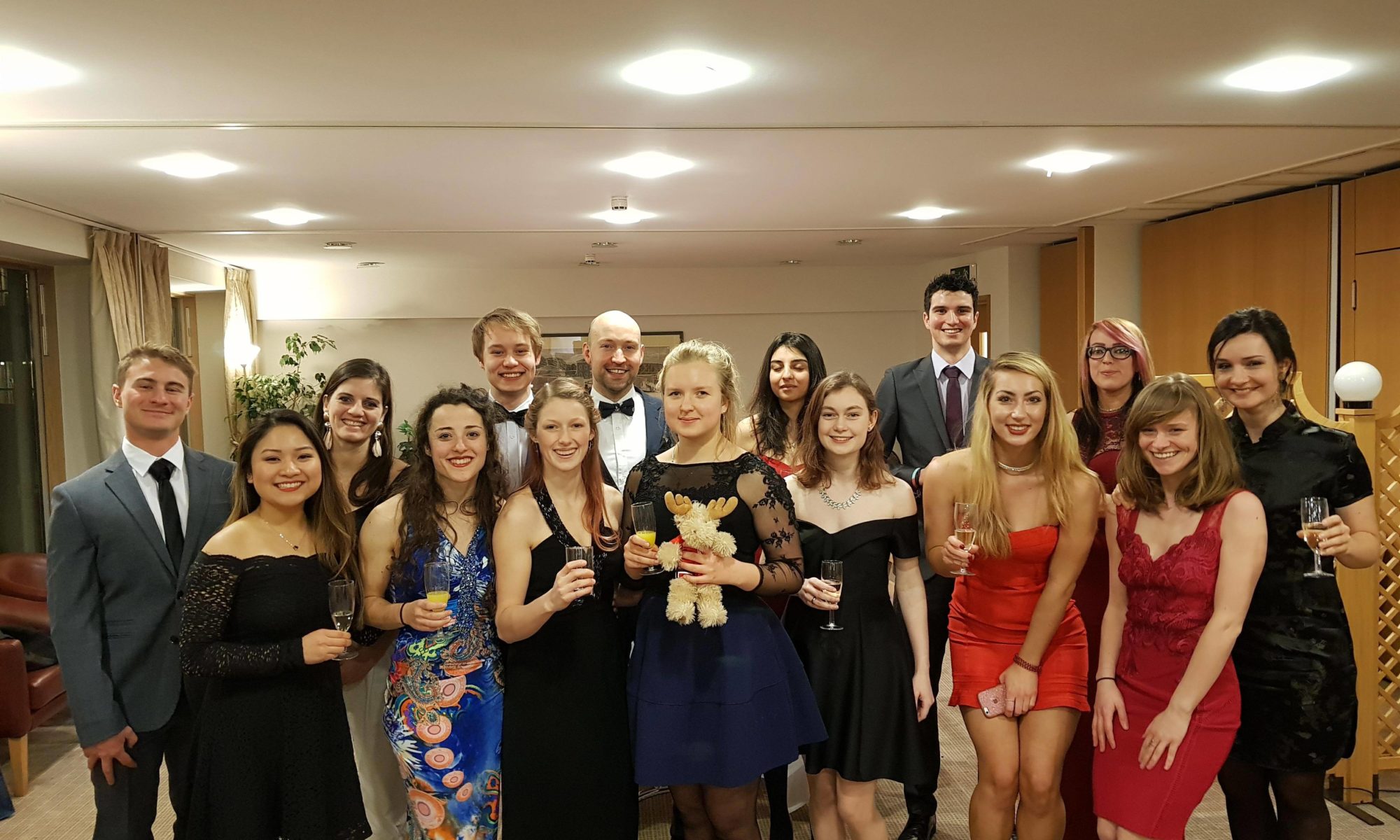 The Cambridge University Pole Society Annual Dinner was held at Hughes Hall on Sunday 25 February 2018. Hughes prepared a drinks reception and delicious three course meal in a private dining hall. You really missed out if you weren’t there! The menu included crab roulade or a camembert, fig and onion tart; loin of lamb or wild mushroom wellington; and a chocolate fondant with peanut butter ice cream.

Pole Soc members donned their finery but the conversations weren’t as formal. Some highlights from the evening include the mint race, hearing about people’s most embarrassing moments and tea fines (how British)! Ulf, our official mascot joined us for dinner and King Liam aka our President was officially crowned.

It was a great evening getting to know new and old pole friends and we look forwards to many more pole related socials! 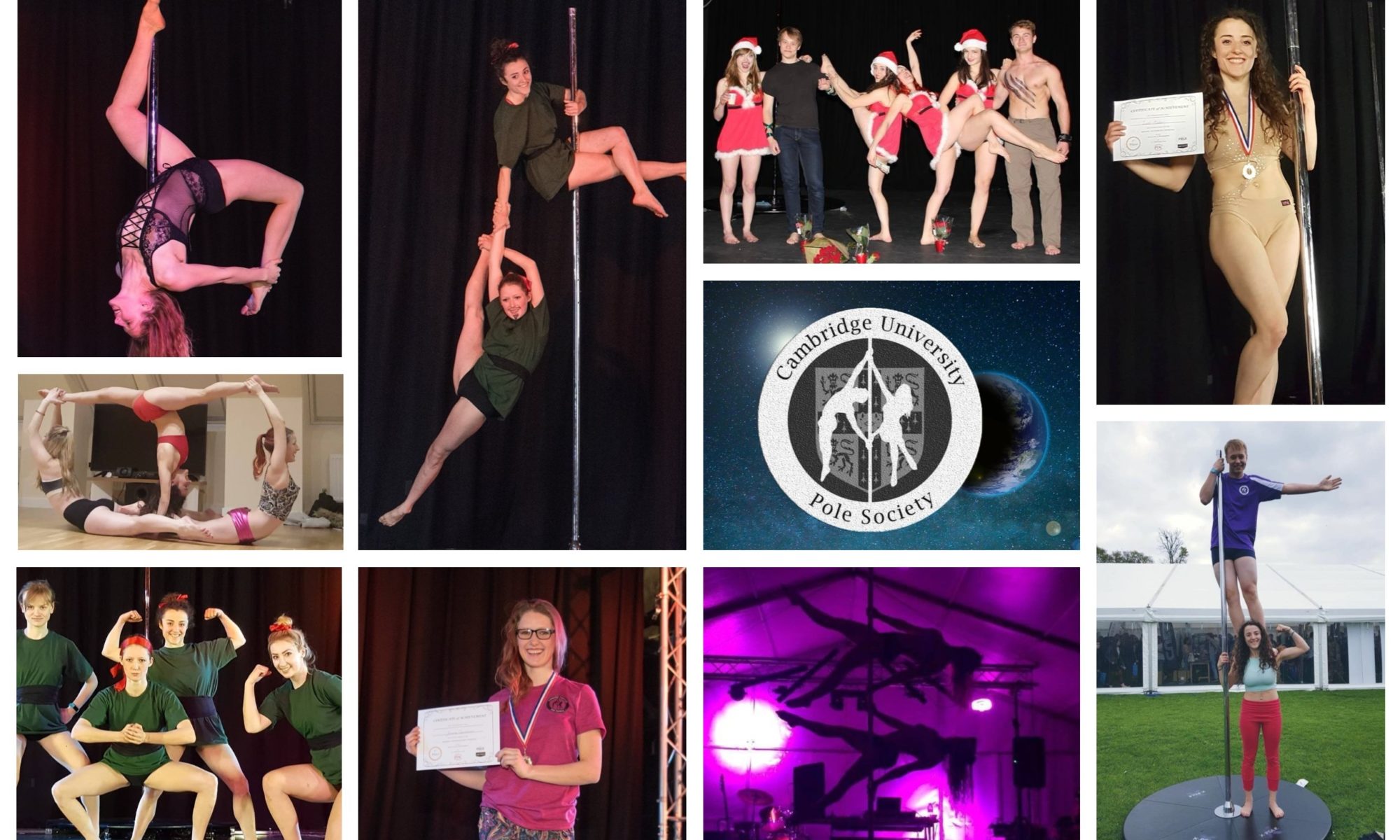 Our second AGM was held in Downing JCR on Sunday 25 February 2018.  Here is a look back at the past year, a look at future plans and an introduction to the fabulous new committee for 2018-2019.

Review of the past year

2017-2018 was the second full year of CUPS being an official Cambridge University Society and its popularity and reach is growing. The club has started performing at many events around Cambridge including St Edmund’s May Ball, the Intervarsity Folk Dance Festival and Boys will be Boys at the ADC Theater. We hosted our first ever showcase, which was a huge success!!! In addition to our talented dancers being able to show off their skills in professional but friendly atmosphere, the club managed to raise a fair sum of money. The level of talent in the club is high and has been proven at 2 competitions in the past year. CUPS won CATS Battle of the Societies and our CUPS team did extremely well at the Midlands Inter University Pole Competition in Birmingham. Jemima Churchhouse placed 3rd in the intermediates solo category and Liat Adler 1st in the advanced category, with stunning performances from the rest of the team.

The next year is expected to bring many exciting classes and performances and lets not forget Pole Surf Camp! Some things to look forwards to include:Varsity

There are so many great things to look forwards to in the next years, so let us know if you would like to get involved 🙂

CUPS is super excited to annoucnce our FIRST. EVER . SHOWCASE!!!! Featuring our wonderful students and possibly a special guest performer!!!

We are not just looking for performers either, we need people for costumes, lighting, choreo, publicity…. SO WHAT ARE YOU WAITING FOR!? Register your interest and let’s make this the BEST SHOWCASE EVER!

It’s got loads of new features that we can’t easily implement into the Facebook page:

Please let me know if you find any problems with the website by emailing li232@cam.ac.uk.

Thank you to Haskan Kaya for his help with setting up the website.

You can pay for classes via:

NOTE: We only accept cancellations if you let us know at least 24 hours before the lesson.